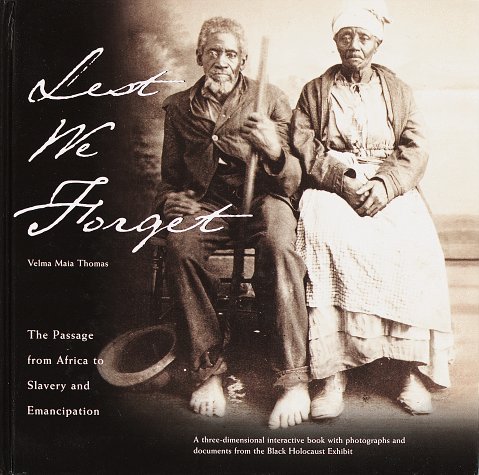 Lest We Forget: The Passage from Africa to Slavery and Emancipation: A Three-Dimensional Interactive Book with Photographs and Documents from the Black Holocaust Exhibit

No matter how much one has read about the degradation of slavery, the images and the words in this book will have a firm impact on its audience. A three-dimensional interactive book, it contains reproductions of photographs and documents from the Black Holocaust Exhibit that was conceived and developed by the author. By combining highly effective and readable text with photographs, news clipping, drawings, and facsimilies of documents, Thomas shares with her readers the details of virtually every aspect of slave life from the horrors of slave ships to the dangers of trying to escape. Throughout the assortment of pop-out and pull-out replicas, points are raised that will lead to classroom discussion. With its inclusion of documents such as a receipt for a slave woman or the freedom papers of a former slave, those discussions will be given an added dimension.

This ingenious historical document is an interactive, three-dimensional experience that dramatically addresses the painful history of America and the slave trade. Based on the Black Holocaust Exhibit, Lest We Forget is history brought to life by Velma Maia Thomas, curator. Accompanying the book’s documents, Thomas’ exquisite prose is interwoven with the moving words of slaves themselves.

Velma Maia Thomas, the developer of the Black Holocaust Exhibit, has written a passionate yet brief account of slavery in America.

Lest We Forget is packaged to mimic a multimedia exhibit: pages fold out, pop up, and often contain three-dimensional objects, such as an envelope that opens to reveal a facsimile of a receipt for a slave named Francis. The production techniques may make Lest We Forget look like a children’s book, but the text offers a serious, moving depiction of how slaves lived before emancipation.

FREEDOM’S CHILDREN: THE PASSAGE FROM EMANCIPATION TO THE GREAT MIGRATION by Velma Maia Thomas (Crown Publishing Group, 2000)
The sequel to LEST WE FORGET describes the simultaneous excitement and terror felt by newly freed slaves