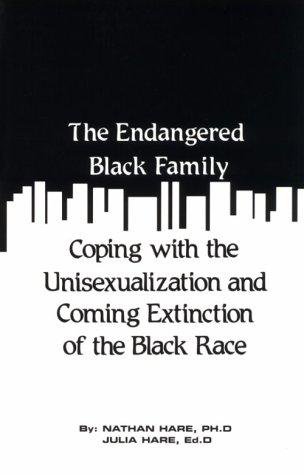 The Endangered Black Family by: Nathan and Julia Hare

The Endangered Black Family by: Nathan and Hare, Julia Hare

Summary: Program host Trudy Gallant explores with the Hares their views on the strained relationships between black men and black women, and the impact they have on black families and the development of black youth.

The Hares explain that black women and black men are often at odds – and the black family is thereby endangered – because of the very high rates of unemployment among black men. Women, Julia Hare says, blame the men for being unemployed and men blame the women for being too strong and emasculating. The result, she says, has often been broken families and the consequent loss of fathers has been especially damaging to black boys.

One technique the Hares suggest to change that dynamic is the use of rites of passage ceremonies in which a child is initiated into adulthood at the end of his or her 12th year. The ceremony follows a year of formal preparation by the child and involves the community. Nathan Hare says it is especially important for boys, so that they can be steered away from the path that leads to delinquency and gang membership.

“We want to catch these boys before they get into this gang,” Nathan Hare says. “We think the gang is giving these boys what we have not given them, such as bonding, identity, a sense of belonging, a sense of importance. That sort of thing has been lost.”

The Hares say that the problems facing black families require a reemphasis on values and community to address such issues as high incarceration rates for black males and an education system that does not adequately prepare black children for the modern world. For example, black children need to be taught sexual values, not merely be given condoms. And black social and professional organizations could hold their annual conferences on the campuses of historically black colleges to provide financial support to those institutions, rather than at luxury resorts.

“The black community will be the solution to this problem,” says Julia Hare. “It will have to be.” Nathan Hare adds that blacks have to look to themselves – not to whites – to elevate and empower black people.

“Our way will be more human,” he says. “We will not outstrip the white race in condoms or technology or weapons of war, but we can restore the lost spirituality. This is what the world needs now, the white race and the black race. . . . We have to stop trying to escape our blackness and our community.”

This program offers not merely an examination of the problems facing black families in the late 1980s, but an illustration of some of the creative ways intellectual leaders were seeking to promote a renewed sense of community.
TheDoctor